skip to main | skip to sidebar

I recently acquired an Apple Xserve 2,1 with the following specifications for the lowly sum of $200 USD.


I have also acquired:


I still need to acquire:
These machines, by default, require 800MHz PC2-6400 FB-DIMM to run the 2.8, 3.0 and 3.2 GHz E5400 class Xeon CPUs; however, since I'm trying to reduce power consumption, the 2.5GHz Xeon CPUs I acquired only require 667MHz FB-DIMM, thus the Kingston acquisition.  It happened to also cost significantly less than the 800MHz stuff, which provides only a very marginal performance increase.  Unfortunately, this only reduced power consumption to a whopping 255 watts at idle.  Maybe removing the 3 1TB drives would drive it down further, but I wouldn't be too certain it would really matter.  At some time in the process, you begin to ask yourself, "What's the point of this if I'll never reach sub 100 watts?"

It is beyond comprehension why Apple couldn't simply release an updated mezzanine card or include support (albeit slow) for the X1300 graphics adapter in 10.8, 10.9 and 10.10.  With that, no edits to the PlatformSupport.plist would be required.  Actually, it isn't beyond comprehension, they wanted to drive sales to the new Mac Pro lines, which are fine, but inherently still expensive.  I wanted a 1U form factor, just because I can and it was inexpensive.

I'm still working to determine the best way to flash the video card I have acquired; however, if it appears unlikely to cooperate, I plan to purchase the NVidia GT120 from an Apple Mac Pro and move on.  I may brick the card in the process, so I plan to update this space when the time is right.

Edit: The PCI-E Samsung XP941 SSD and NVidia GT120 are working beautifully now.  I also purchased a very inexpensive USB audio which "just works" with no further tinkering.  Let there be sound!  I had a few small problems with the memory at first, but now it seems to have stabilized after swapping out one bad module.  All that remains is a RAID battery and storage solutions.

Note: To upgrade from 10.10.2 to 10.10.3, the PlatformSupport.plist has changed!  You'll need to boot from your rescue partition, jump into a shell and modify the new PlatformSupport.plist to continue operation.  That file is constantly modified by Apple to keep pace with new hardware releases, or to deprecate old ones (as is the case for the xserve). 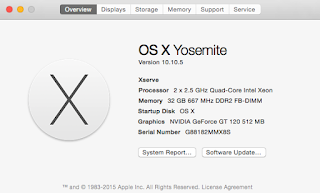 Edit: Could someone please try a Kingstone HyperX Predator PCIe SSD in a Mac Pro or XServe?  I'd like to know if it is capable of booting OSX 10.10.5! (P.S. If Kingston will send me one, I'll be happy to test it against this Samsung XP941!)

Edit: I've now ordered a regular LSI SAS1064E so I can experiment running VMWare ESXi 6.0 U1 natively on this platform, and putting OSX Yosemite inside.  ESXi doesn't support the native RAID, plus my RAID battery is still dead, so I had little interest in reviving it once I found a regular SAS backplane (which SHOULD support 3GBPS SATA II at least) for $20 shipped.  In other news, VMWare ESXi 6.0 U1 did NOT find my Samsung XP941, but would install to a 32GB USB drive, interestingly.

Edit: The Xserve2,1 does fully support ESXi 6.0 U1 with the LSI SAS1064E card, and I was able to install Yosemite within ESXi though the console did exhibit a few issues.  I could correct them, but it's still idling at 240 watts, which is horribly inefficient.  Here's a quick snapshot for the curious! 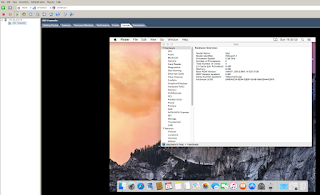 Edit: This server is now for sale, as-configured, but without the SSD.  I'll include the 2.8GHz Xeons if you want them as well.  Make an offer, I'm a reasonable individual -- do bear in mind that this will come with a RUNNING installation of Yosemite 10.10.5 and/or VMWare ESXi if you so choose!  I will also include the Apple RAID card and original (dead) battery.

Edit (10.01.2015): For OS X El Capitan, 10.11.0 (1), it seems you will no longer need both augmentations in /System/Library/CoreServices/PlatformSupport.plist, you'll only need to add 'Mac-F42289C8' at the bottom in another tag. I'll post a screen shot of the system once I get home.  Unfortunately, this is now an operating-system protected file, so you won't be able to edit it while the system is running without making changes or entering single user mode (most likely). 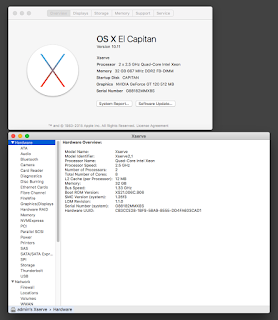